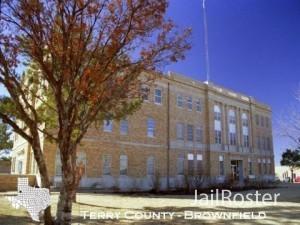 Doing an inmate search for an inmate in the Terry County Jail is very simple. Now you can do an inmate search from your computer or mobile device when you're on the go or at the comfort of your own home. So you won't have to waste your time just to be looking for the right phone number, or better yet you won't have to waste your time being transferred from one person to the next, being put on hold or getting disconnected.

Recent bookings, as well as current inmates being held in the Terry County Jail, can be found in this database.

If you do not see the information you are looking for in the database, you can call the Terry County Jail can be reached at 806-637-2212 if you can not find the information that you need.

The Terry County Jail inmates are allowed to get written letters from their family and friends. The jail employees examine all mail that comes in and goes out. Before letters are passed out to the inmates all prohibited items that are sent along with the letters will get thrown out.

Inmates in the Terry County Jail are allowed to get books, newspapers, magazines and newspapers. Newspapers, books and magazines are required to be sent straight from the publisher or bookstore to the jail. All books that are being sent to the jail must be new.

The Terry County Jail is mailing address for inmates is:

Money orders or transfers from Western Union are not accepted at the Terry County Jail.

You can also fund an inmate's TouchPay account which is their phone service. You will be able to call an inmate at this toll-free phone number 1-866-232-1899 . You can deposit money by going online to their official TouchPay

You can also deposit funds by using their TouchPay kiosk by going the Terry County Jail lobby. You can use Visa, MasterCard, and cash deposits at the kiosk.

Funds can be deposited 24 hours a day, 7 days a week and the money will be available 24 hours after the deposit is made.

Your Payer User ID information will need to be entered to be sure your funds are getting sent to the correct inmate.

However, to use this service there's a charge.

Combined Public Communications contracts with the Terry County Jail for their phone service.

There are 2 plans that the Combined Public Communications offers which is the direct pay and prepaid calling plan.

Inmates are able to call one number of their choice with the direct pay plans. By making an account online or by using the kiosk in the lobby you are able to fund this account.

Inmates are allowed to have one visit for each calendar week. 2 adults and 3 children under the age of 18 are allowed to visit at a time. All visitors 18 years and older, will need to show their driver’s license, state identification card, or a United States Passport.

You will need to provide a callback number when you are making your appointment. You can change or cancel your visitation with a code that will be given to you. Make sure arrive for your visitation on time.

Make sure you are following dress code rules and avoid any crude behavior or your visitation will be canceled and you will not be able to visit again.

Make sure you leave all of your personal belongings in your vehicle. In the lobby, you will be allowed to buy beverages and snacks.

Terry County Jail inmates are allowed to have 1 visit for each calendar week. Up to 2 adults and three children under the age of 18 are allowed for each visit.